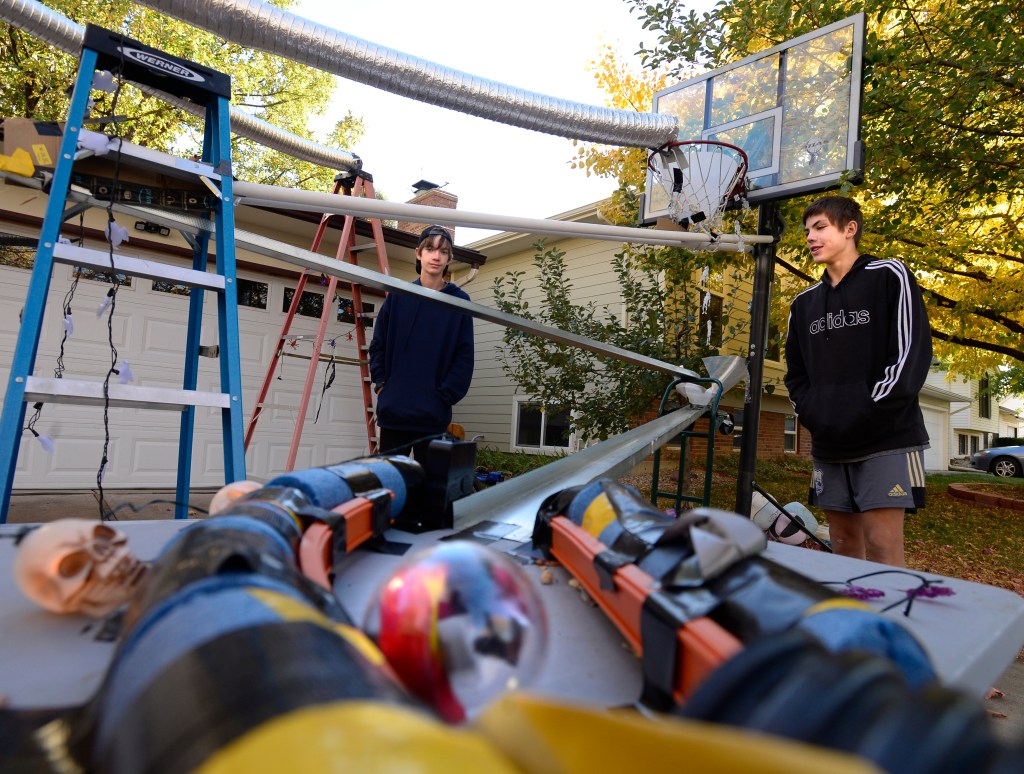 Ben Redding, a freshman at Monarch High School, and Liam Dols, a freshman at Centaurus High School, spent about three to four hours each Sunday during the past four weeks designing and building the system that rolls a ball filled with candy down a driveway.

The delivery system uses PVC pipes, drain tiles, gutters, dryer vents, shelf racks, a tetherball pole, duct tape, cardboard, and other materials. Many of the materials were purchased at Resource Central in Boulder and others were found in Redding’s garage and backyard.

Redding’s father, John Redding, said he grabbed a couple cart loads of materials at Resource Central, gave it to the boys and let them do the rest.

The system works by taping two pieces of candy to the inside of refillable Christmas ornaments that is then placed into a dryer vent. The balls roll down the materials, pass a sensor that turns on Halloween music and comes out at the end by the sidewalk. Redding said the candy delivery system will be lit up by lights at night and glow sticks will be placed inside the ornaments.

John Redding said his son and Dols are interested in Rube Goldberg machines, which is a contraption designed to complete a task in many steps.

Dols said they wanted to create something more interesting compared to their design last Halloween that used a hot wheels track to deliver candy to trick-or-treaters while social distancing. The candy was taped to the hot wheel cars and placed on the track that ran from the door down to the sidewalk.

“Last year, Halloween was a lot different because of COVID,” Redding said. “So a lot of people were coming up with clever ways to get the candy to trick-or-treaters without contact. We wanted to do a yearly thing because of how much fun it was, and so we came up with a few ideas and this was the one we liked the most.”

Dols and Redding said they had several ideas. The first idea they had was sitting on the roof and using a leaf blower to deliver candy. The design for the current system also changed several times before they decided to create a zig-zag pattern down the driveway.

Redding’s sister, Ellie, also helped by offering ideas for the candy delivery system. Their mother, Brooke Redding, said Ellie was her assistant health and safety director because she kept an eye on what Dols and Ben Redding were creating outside.

Dols said they have had several people pass the driveway that have shown interest in the design.

“We’ve also had a lot of people just walk by and say, ‘Oh, this is kind of cool,’ or walking their dogs and they’re just intrigued,” Dols said.

Redding’s parents said they were proud and enjoyed watching their son and Dols create the design.

“They were creative, they were building things, they were problem solving,” Brooke Redding said. “I just thought it was fantastic. What a great way to spend part of your weekend.”

Redding said the ball was weighed down because of how light the ball is compared to the candy. Eventually they came up with the idea of taping candy to both sides to get the ball to roll down the track.

Redding and Dols said they will have a sign about their candy delivery system that will be posted on the stop sign by their street to get more people to come by on Halloween. The boys will be outside in unicorn costumes to deliver candy to trick-or-treaters with their contraption located on West Maple Court in Louisville.