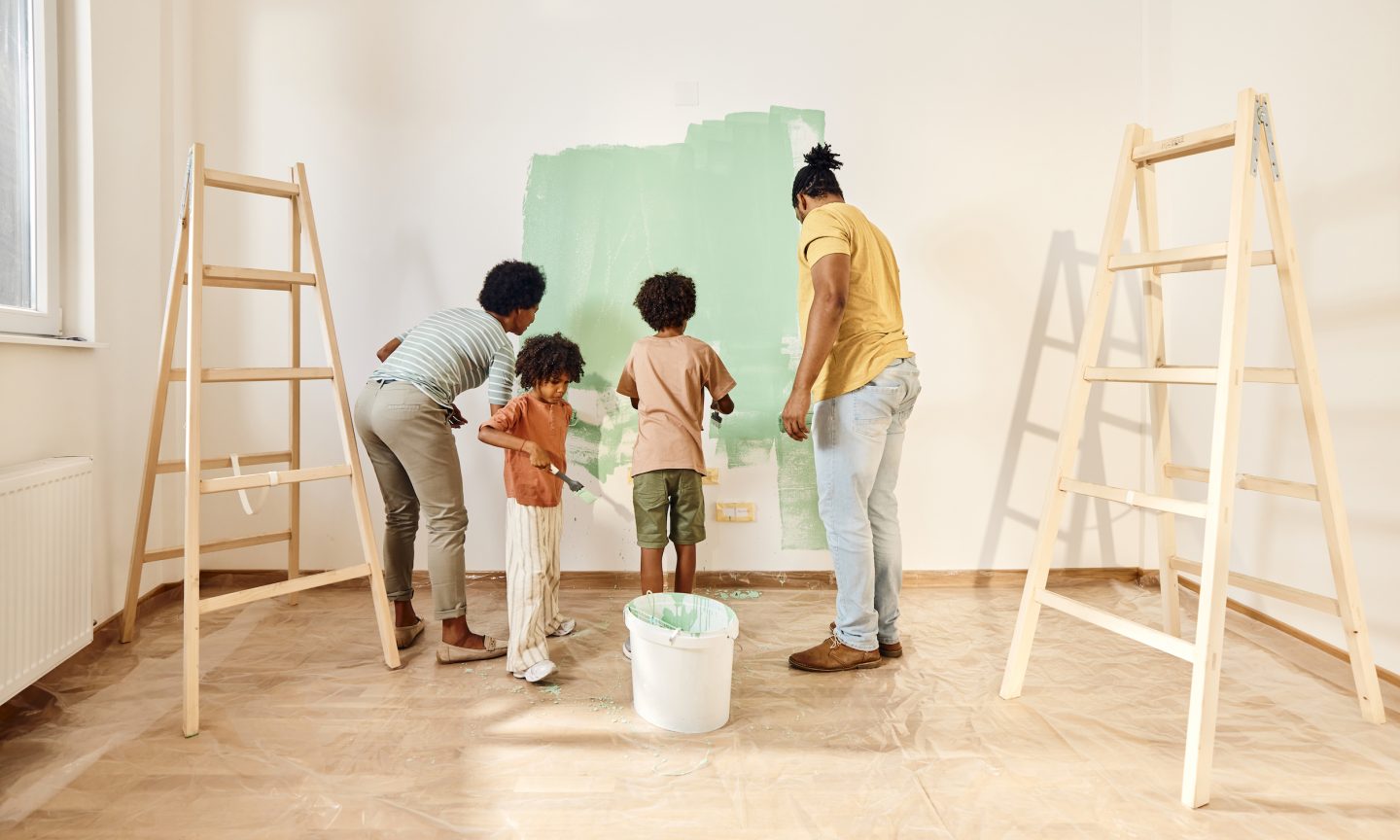 American homeowners spent more than a half-trillion dollars on home improvement projects in recent years, but they say inflation and a potential recession will be factors in how much they take on moving forward.

From 2019 to 2021, American homeowners undertook some 135 million home improvement projects, spending an estimated $624 billion, according to the most recent American Housing Survey from the U.S. Census Bureau. That’s an increase of about $100 billion in home improvement spending over the previous survey period (2017-2019).

This two-year period began before any of us knew the COVID-19 pandemic was coming, and it stretched through lockdowns and ambitious stuck-at-home DIY projects and into a housing market where homes — even those in disrepair — were selling for a mint. Any one of these factors could affect how people spend money on improving their homes. There’s little doubt that every one of them did.

“The pandemic triggered a lot of home improvements,” says NerdWallet home and mortgage expert Holden Lewis. “The shutdowns compelled homeowners to repurpose living spaces into offices and classrooms. People living in small houses and cramped apartments sought bigger digs in suburbia. Each of these developments led to renovations, whether to make homes more livable or to prepare them for sale.”

In this third biennial NerdWallet Home Improvement Report, we analyze the latest American Housing Survey data covering 2019 to 2021, when homeowners were asked between May 3 and Sept. 30, 2021, about their projects during the “previous two years.” We pair this with findings from a nationally representative NerdWallet survey conducted online by The Harris Poll from Sept. 27-29, 2022, asking 1,404 homeowners about their home improvement activities and sentiment.

Here’s what’s inside this year’s report:

Homeowners DIY’d nearly 53 million of their projects. Do-it-yourself, or DIY, projects accounted for 39% of total projects and 20% of total spending in the two-year census survey period.

The share of homeowners “easily” able to pay for improvements decreased. Fewer than half (42%) who took on home improvement projects over the past two years say they were able to easily pay for most of them without tapping into savings, going into debt or making sacrifices, according to the recent NerdWallet survey. That’s down from 52% who said the same thing when we asked in 2020.

Most planned improvements aren’t targeting potential home buyers. Just 20% of homeowners considering home improvements in the next two years say it’s to make their home more attractive to potential buyers. Instead, the most commonly cited reasons include making it more comfortable (54%) and simply feeling more satisfied with it (52%), according to the survey.

Upcoming projects may hinge on the economy. While homeowners anticipate spending $7,746, on average, on home improvement projects over the next two years, inflation (44%) and whether or not we’re in a recession (27%) are just a few of the economic factors that will play a role in many of their decisions, the survey found.

The state of home improvements

Homeowners spent $624 billion on home repair and improvement projects during the two-year period covered by the 2021 American Housing Survey. This marks a doubling, from about $300 billion, in just a decade.

Considering current inflation, it would be easy to write off this increase as a matter of higher costs, but that’s not it: The number of projects increased during this period from about 94 million in the 2013 survey to 134.8 million in 2021 — a rise of 44%.

Projects cost $4,838, on average, during the 2021 survey period. The most expensive among them were kitchen renovations, which cost $33,190, on average, while the most affordable were security system installations, averaging $754.

Early in the pandemic, when people were newly shuttered in their homes, there was an explosion in home improvement projects. But before this, and after people began returning to work, this action slowed.

Handy homeowner tip: Home improvement projects taken on when you’re spending more time at home aren’t necessarily the same projects you take on in the course of a typical weekend. A week or three at home might be a great time to update your bathroom — it might even be an enjoyable project — but finding time for repairs and maintenance can be more difficult and less exciting. Make sure you’re setting aside money and time for these more mundane activities. Though you may not beam with pride when you walk by your clean gutters, clearing the clogs that could lead to rainwater damage is the kind of smaller project that can save you money for as long as you own your home.

The census survey reflects a slight increase in the share of DIY projects, possibly spurred in part by the pandemic shutdowns in 2020.

In the most recent census survey period (2019-2021), about 53 million, or 39%, of home improvement projects were DIY, compared with 37% in the previous two-year period. Spending on these projects amounted to 20% of the total amount spent on home improvements during the two-year period. The average amount spent on a DIY project was $2,500, versus $6,350 on a professional job.

Handy homeowner tip: “Doing your own home improvement work can save you some money, but don’t be overzealous,” cautions Lewis. “It might be fun and cheaper to take a sledgehammer to a wall on your own, but finding out after the fact that it was a load-bearing wall could make you feel like the comic relief on a home renovation show while costing you a bundle.”

Paying for it all

Fewer than half (42%) of homeowners who took on home improvement projects over the past two years say they were able to easily pay for the majority of them without tapping into savings, going into debt or making sacrifices, according to the recent NerdWallet survey. That’s down from 52% who said the same thing when we asked in 2020.

But these projects can be costly, and 20% of homeowners who took on such projects over the past two years had to make sacrifices such as cutting back on discretionary spending or selling items, 14% had to tap into or exhaust emergency savings, 12% had to take on debt such as loans or credit card debt, and 8% borrowed against the equity in their home to pay for the majority of the work.

Cash is king when it comes to home improvements — 78% of projects during the census survey period were mainly paid for with cash, according to the 2021 American Housing Survey. But few homeowners have a deep well to draw from, so funding choices tend to change as projects get more costly.

Handy homeowner tip: Weigh your choice of home improvement funding carefully. Cash costs nothing in the form of interest, but it could mean depleting your savings. Other forms of credit — credit cards, home equity financing options and personal loans, for example — all come with interest, fees and variable payoff terms. Ideally, you’ve saved ahead and can fund your project outright. But if that’s not the case, choose your funding option after considering all of the costs and benefits.

What to expect: Upcoming projects

For inspiration on their home improvement projects, 40% of homeowners say they look to online content, more than any other source.

Homeowners anticipate they’ll spend $7,746 on home repair and improvement projects over the next two years, on average, with nearly a quarter (24%) expecting to spend $10,000 or more, according to the NerdWallet survey. That’s up from a $6,251 average anticipated spend when we asked in 2020.

But given the current state of the economy, they know there will be things to contend with, factors that could impact their ability to spend on the projects or get them done. When asked what factors will play a role in their decision if and when to do projects in the coming two years, 44% of homeowners cite inflation, 38% the ability to purchase supplies, 30% the ability to find a contractor to do the work, 30% the housing market and 27% whether or not we’re in a recession.

Many (39%) planning projects in the next two years hope to have money saved specifically for them, and about one-third (34%) plan to use a credit card.

“Many homeowners are going to end up living in their current homes longer than they initially intended, because they won’t want to get stuck with a high mortgage rate on their move-up home,” says Lewis. “Instead, owners will stay put and ‘move up’ by improving their current homes. When they do, they’ll do themselves a favor by scoping out the most cost-effective way to pay.”

This survey was conducted online within the U.S. by The Harris Poll on behalf of NerdWallet from Sept. 27-29, 2022, among 2,047 U.S. adults ages 18 and older, including 1,404 homeowners. The sampling precision of Harris online polls is measured by using a Bayesian credible interval. For this study, the sample data is accurate to within +/- 2.8 percentage points using a 95% confidence level. For complete survey methodology, including weighting variables and subgroup sample sizes, contact Alikay Wood at [email protected]

The American Housing Survey is released every two years. For the latest release, interviews took place between May 3 and Sept. 30, 2021, and homeowners were asked about the home improvement projects done on their home “in the past two years.” Respondents could have interpreted that to mean since January 2019 or since mid-2019.

The AHS asks homeowners to self-report what they spent on projects in a variety of categories. Beyond defining what constitutes a remodel versus a renovation, the survey does not break out projects by scale, scope, quality of materials or finish.

AHS data used in this report is specific to owner-occupied households.

The AHS measures project expenditures. For the purposes of this analysis, project “costs” and “expenditures” are used interchangeably.